Here’s some Barsoomiana for Labyrinth Lord. The Chessmen of Mars is one of the better of a pretty bananas series, with both the game of jetan and these pretty creepy creatures. Burroughs’s kaldanes couldn’t transform people into rykors, but it certainly adds an entertaining layer of wickedness and body horror. 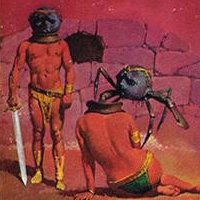 Kaldane
No. Enc.: 1d4 (3d6)
Alignment: Chaotic
Movement: 60’ (20’)
Armor Class: 5
Hit Dice: 3
Attacks: 3 (2 claws, bite)
Damage: 1d3/1d3/1d3+paralysis
Save: F3
Morale: 9
Hoard Class: XX
XP: 95
The kaldane are a species of loathsome, highly intelligent insectile aberrations. Individuals resemble squamous ticks about the size of a human head, with three bulbous eyes, a pair of scythelike chelae, and a mouth wreathed in slimy, dangling, paralytic tentacles. Kaldanes are the degenerate descendants of a formerly powerful planetary race with prodigious mental powers and marvelous alien technology. These unsentimentally calculating and coldly rational beings view other creatures as nothing more than food or livestock, and exist in symbiosis with their headless rykor. Rykors—and surgically modified humans—are mounts, food, and beasts of burden. A kaldane joined with a rykor fights as a single creature with two attacks (the rykor’s weapon attack and the kaldane’s bite attack), and all damage taken by the pair accrues to the rykor (although an exceptional or vorpal attack might dislodge the kaldane from its mount).

Kaldanes attack with claws and a venomous bite. Any successful bite attack requires the opponent to attempt a saving throw versus paralysis, or become paralyzed for 2d4 turns. This paralysis may be cured with cure light wounds. Elves are immune to the paralysis of kaldanes, and the paralysis cannot take effect on humanoids larger than ogres.

Kaldanes lair in narrow, subterranean warrens, often capped by towers guarding large plantations. Their lairs are always guarded by a herd of 6d6 rykors. Kaldanes outside their warrens will always be mounted and accompanied by 1d4 additional rykors each. A kaldane queen is an exceptional kaldane, who attacks like a monster of 6 HD, and all damage dealt receives a bonus of +1. In addition, a kaldane queen has a charm gaze (as the charm person spell) that takes effect if a victim peers into a queen’s eyes. A kaldane queen is always accompanied by a loyal bodyguard, totaling 1d4 individuals. The bodyguards each have 4d6 hit points, and attack as monsters with 4 HD. All kaldanes in the presence of the queen have a morale score of 11.

Kaldanes spawn from eggs laid by the parthenogenic queen. After decapitating a helpless or dying humanoid, a kaldane queen can surgically transform the creature’s body into a living rykor using its razor-sharp chelae and various secretions. This process takes several hours and irrevocably slays the original creature, transforming its body into a horrifying living aberration.

Rykor
No. Enc.: 2d4 (6d6)
Alignment: Chaotic
Movement: 90’ (30’)
Armor Class: 5
Hit Dice: 3+1
Attacks: 1 (weapon)
Damage: 1d6+1 or weapon+1
Save: F4
Morale: 9
Hoard Class: None
XP: 65
The rykors or acephali are scaly humanoid aberrations that resemble headless lizardfolk, with two long eyestalks and a simple mouth protruding from the stump of their neck. Their immense strength grants them a +1 bonus to damage. Stupid and highly aggressive when uncontrolled, rykors were created by the kaldanes to serve as mounts, food, and beasts of burden. A few are surgically modified humans, without scales but covered in hideous scars. Rykors are thus vulnerable to charm effects and telepathic suggestion, and are the perfect thrall of a kaldane mounted on its neck. Kaldanes are unsentimental about their rykors, but esteem well-bred, strong, and attractive rykors like prize thoroughbreds. Rykors are found on the surface or underground near the towers and subterranean lairs of kaldane.